A Growing Business in Bloom 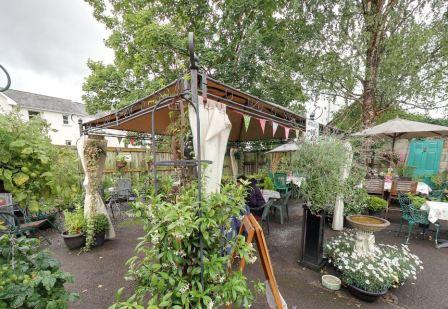 Quirky, individual and eccentric are all words you could use to describe The Potting Shed tea rooms. And owners Paul and Shelley would be happy to hear it.

The couple has worked hard to create a destination which is gloriously rustic and a deliberate mismatch of all things garden-themed.

A welcoming cafe in the heart of the Wye Valley, it's the perfect destination to stop and eat for anyone who appreciates the beautiful outdoors.

Even the food is delightfully different; the pâté is served in plant pots and the salads garnished with radishes delicately carved into flowers, and tiny real pansies fresh from the garden.

Outside, the spacious courtyard is full of greenery. Hanging displays are brimming with fresh tomatoes and flowers, with masses of tubs overflowing with colourful plants. Many of the plants and herbs are used in The Potting Shed kitchen and, in the spring and summer, a selection of different shrubs and baskets can be bought here.

The gardener amongst the couple is Shelley, whose green-fingered enthusiasm and love of vintage goods is clearly visible in the many decorations and knick knacks dotted throughout The Potting Shed.

"For months she was going around charity shops, bric a brac stalls, you name it," said Paul. "In fact, she's still doing it."

And enthusiastic customers have joined in with the collecting. "We have customers now who bring in antique crockery for us to use. We've also got quirky tea cosies that have been knitted especially for us." 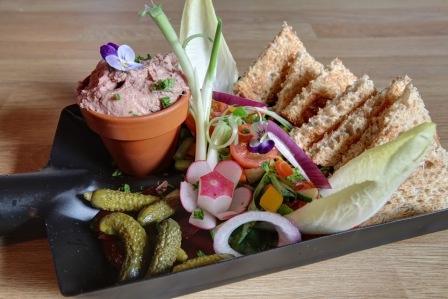 The business has quickly grown since opening in February 2014. Taking ownership of a dilapidated building which had been unused for more than three years, Paul and Shelley have turned it into something special. In fact, Paul has now given up his job as a builder to work there full time.

"We were originally going to open a garden centre that served teas," Paul told us, "but it turned out that more people wanted tea and cake."

An oasis for food and garden-lovers, you can even buy a packet of seeds or jar of home-made jam for your potting shed and kitchen at home.

If you want to visit this location however, you'll have to be quick. From January 2016, The Potting Shed is moving to a larger venue 3 miles up the road at Whitchurch, where Paul and Shelley will be using their decorating and gardening skills to re-create and build on their current success, adding B&B facilities too.

We look forward to seeing their new virtual tour.