A Winner of a Skatepark

One of the largest indoor venues of its kind in the world, Rush Skatepark offers an awesome experience for riders of BMX, Scooter, Skateboards and Aggressive Skates.

The business is the brainchild of husband-and-wife team, Jerry and Michelle. Numerous weekends spent ferrying their son to different skate parks around the country set them to thinking about building their own. What they wanted was something with fantastic facilities, and also with chill-out areas where parents like them could relax in comfort while the kids enjoy the park.

When the spacious former warehouse studios of artist Damien Hurst at Brimscombe Port near Stroud in Gloucestershire became available, the concept started to grow into reality. 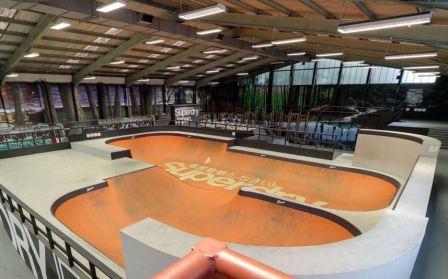 Beginning life as a smaller project originally, the ideas for the park came thick and fast, eventually growing into the incredible finished creation it is today.

"Jerry likes to think outside the box with great schemes and plans", explained Michelle. "He had a vision and he's pulled that vision off."

Five amazing areas have been constructed from birch wood in the 40,000 square foot park, designed to suit every skill level, and all enclosed under one roof. It's a massive space which, unlike some skateparks, has no pillars to impair the flow of lines inside. Without obstructions, the opportunities are almost endless for skaters to take exciting different angles and drops.

There's also a practice area with foam pit and resi-covered foam ramps where moves can be practised and perfected in a more cushioned environment before progressing onto the tougher surfaces of wood.

In keeping with the previous creative use of the building, floor to ceiling artwork covers every wall. London landmarks, haunted house and graveyard, and forest background set off with real tree trunks, are just some of the striking scenes.

Produced with spray paints and stencils, all by hand, the murals are the work of two guys from a nearby street art agency. Ensuring they didn't get in the way of building work when the interior was being built, the duo painted through many nights from midnight to sunrise until the works of art were finished. 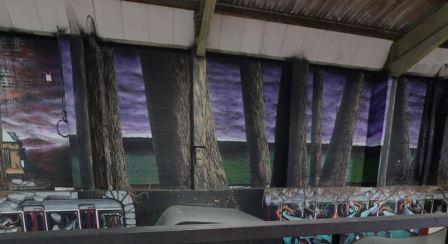 The latest addition to the indoor structures is a viewing platform, with money from online crowdfunding going towards raising the £50,000 required to build it. Giving a birds-eye view over the whole park, this space has tables and chairs for parents to relax over tea or coffee while watching the buzz of riding activity below.

Drawing people from all over the globe, over 70,000 people have enjoyed the skatepark since it opened, including visitors from Russia, Asia, Europe, Australia and the US. With the help of sponsorship, the park has also hosted national and international competitions, such as the World Scooter Cup 2015 and ISA Scooter World Championships 2014.