Cheddar Skate Park has been a familiar place for years. Close to our previous office, next to the local Rugby Club and the reservoir, it's a popular draw for those who enjoy skating, biking or boarding over the expanse of smooth concrete surfaces, ramps and jumps. 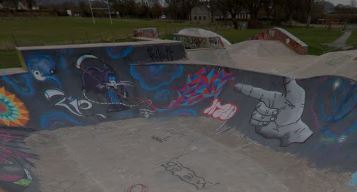 So when we read in one of our local newspapers that it had been painted over in artistic graffiti, complete with RIP tribute to the late Terry Pratchett, we knew we'd have to go and take a look. And, once there, it seemed only natural to take a Google View of the park in all its newly colourful glory.

Dan Small, owner of the Crafty Shop, an independent arts and crafts retailer in nearby Glastonbury, was behind the idea for the transformation. He organised for seven street artist friends to get together for a 'paint-jam', spending the day spray painting over the grey bowl with creative graffiti.

"The skate park is in a nice location and it needed a paint," explained Dan." My shop had been open for a year on March 14th, so I thought I could mark the anniversary by arranging for some friends to get involved in a big project."

The artists created their own individual images on the park, with one depicting the character 'Death of Rats' from Terry Pratchett's fantasy book series, DiscWorld. You'll also find a peacock, a heart, a giant hand, a punk face, graffiti lettering in 'wildstyle', and a spiritual symbol in Hinduism and Buddhism known as a mandala.

What do the kids who hang out at the skate park think of the artwork? Said Dan, "They're really chuffed that some decent work has gone on the walls."

Enjoy the ride around the park in our Google View and see if you can make out the different designs. With thanks to street artists Jasmin, Emza, Luvm, Sym, Sikoh, Nzo and Poose.