Last Chance for a Drink Before France

Bursting with character and just a pebble's throw from the sea, you'll find this atmospheric gem of a pub in the pretty fishing village of Polperro, in South West Cornwall. 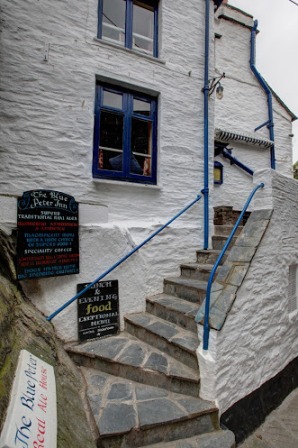 Built into the cliff on the quay back in the 16th century, The Blue Peter is the last pub you'll reach before crossing the sea to France. Take their virtual tour and soak up some of the aura of smugglers, buccaneers, historical escapades and intrigue which are well and truly saturated within these walls.

With its low beams, wooden floors, and panelled bar and ceilings, The Blue Peter is a warm and welcoming destination with the cosy feel of being below deck onboard an ancient galleon. No minimalist lines here, almost every one of its assortment of surfaces is cheerfully crammed with seafaring artefacts, pub memorabilia, quirky items, coloured cushions, and an array of photos of staff and regulars over the years.

We love the two funnels which greet you as you come in the front door, which were salvaged from a ship in the 1980s. There's also the wall above one of the fireplaces which is dedicated to photographs depicting the history of Polperro from the 18th century to the present day. Amongst other curious items is a clarinet case which belonged to regular customer, the late Ian Wheeler, who was a key member of the Chris Barber band and also played with American blues musician, Muddy Waters. 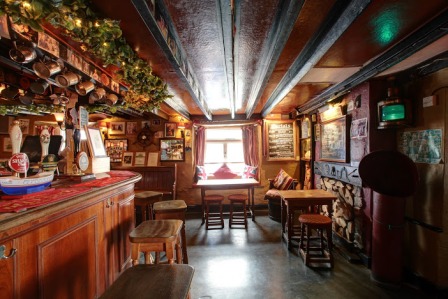 Numerous 'words of wisdom' painted on the beams also catch the eye, particularly those of taller customers who may have to duck their heads as they wind their way to the bar. 'Work's not so bad but it does tend to ruin your day', and 'Happy hour is a nap before opening time', are a couple which made us smile.

Already great fans of this part of the country, our love of all things Cornish has surged further still with the recent TV resurrection of a dashing 18th century Captain and his servant bride. Just along the coast from some of the locations used in the filming of Poldark, The Blue Peter is the place to go to really experience some of Cornwall's wonderful history.

It must feel very atmospheric sipping a pint here next to the roaring fire on a stormy, wave-crashing evening. In fact, if a character in breeches and tricorn hat burst in to proclaim "Shipwreck!", I don't think we'd be a bit surprised.